Named after their daughters Sophia Niki and Alexia Lola, the idea for Niki & Lola came about because they brought the girls to life.

“When I had them I thought, if I can make those, let me see if I can make other things too,” Tingas says. “I went to school for fashion but fashion management and people used to say, ‘Do you design?’ and I would say, ‘Oh no, I’m not artistic.’ So they actually inspired a want to try and do more.”

While Tingas conceptualizes the jewellery designs, Proteau develops the ideas and executes them into finished products made from raw metal and sterling silver.

“My highlight is when Mike actually interprets what I draw and makes something really, really beautiful,” Tingas says, adding they had a third daughter while they launched the line earlier this year. “I’m more like I want this out of the pieces and somehow he figures out how to make my ideas happen. Sometimes you don’t think your ideas will translate and they do.”

Early Nomad, their first collection of one-of-a-kind and handmade earrings, necklaces, rings and bracelets is available online at nikiandlola.com and designed and crafted in their home studio near Danforth and Jones avenues. 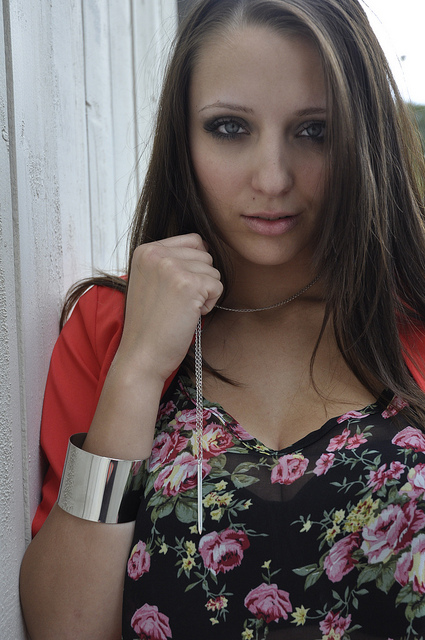 My personal fave: The Agny Spear

“There are a few people who get super excited about everything we do and they’ve been to every launch or media event and it just lifts your spirits and makes you feel like you’re going somewhere,” says Proteau.

Although Tingas had already started creating jewellery before they joined force, once she decided she wanted to go away from beads and into metal jewellery, collaborating was a natural progression since Proteau already had experience cutting, shaving and polishing metal.

“My background hobby wise has been in automobiles, cars, motorcycles so a lot of metal work was involved there,” he says. “As well I have some other hobbies that include electronics and that’s where the soldering came in.”

Inspired by simple geometry and a theme of early humanity, pieces like the shield ring symbolize protection while the astra bracelet, which has Swarovski crystals placed at random around the bangle, symbolizes the night
sky.

“I think it also speak to us, like we’re so different but somehow it meshed like our aesthetics,” Tingas says. “We get our inspirations off of each other like I’m more pretty and Mike’s a little more motorcycle-edgy
and somehow we try and blend those two.”

“It kind of goes with our name too,” adds Proteau. “Our two daughters, the one is like soft and sensitive and the other one’s like rough and tumble.”

It’s easy to see why travellers are drawn to San Miguel de Allende. ✨
💛💜💙♥️
Breakfast of champions to fuel a morning filled with tequila tasting.
There are 200 types of agave but tequila is made only from blue agave.
Loading Comments...
%d bloggers like this: